With the upcoming 2.7 version of Profiler, we will start releasing an Advanced edition alongside the Standard one. All our users who have bought a license until this point in time will automatically have their license work with the Advanced edition for free. This is our way to thank you for your trust!

Apart from support for Torrent files, all features which had been in the Standard edition until now will be kept there. The Advanced edition comes with new features and is especially designed for experts in the forensic and security field.

Profiler 2.6 is out with the following news:

Profiler 2.5 is out with the following news:

In this new edition it’s possible to create dialogs out of views. Just like this:

Of course, it doesn’t have to be a custom view, it can even be a simple text view or a hex view, although usually custom views make more sense for a dialog, as you’ll probably want to show some standard buttons like “Ok” and “Cancel” at the bottom.

While Capstone has been part of Profiler for quite some time now, now it’s possible to directly call its official Python bindings. The module can be found under ‘Pro.capstone’ and can be imported easily to be made working with existing code:

In the Qt framework memory allocations fail silently, at least in the release version. We didn’t notice it, because in the debug version they would at least throw an exception preventing further execution. Since in release the execution wouldn’t be stopped, it was in some cases possible to trigger a failed allocation and then make the program use memory it didn’t own (so basically a buffer overflow). This problem has now been fixed.

Credit goes to the Insid3Code Team for having found and reported the issue. 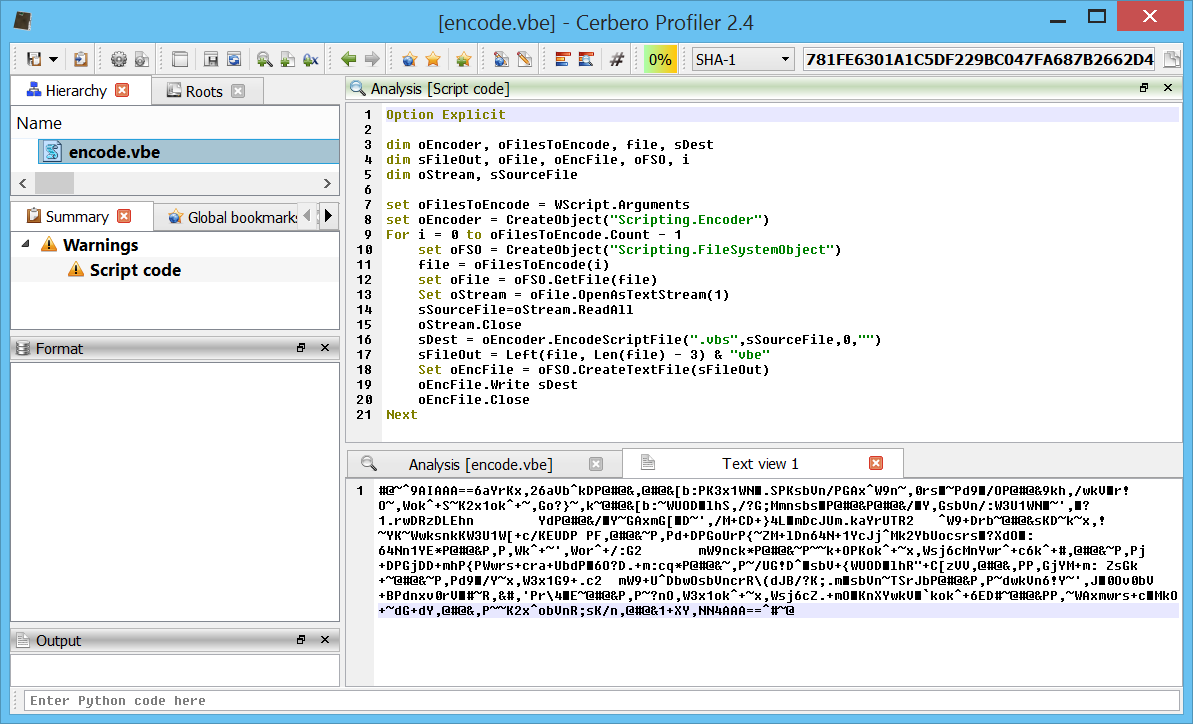 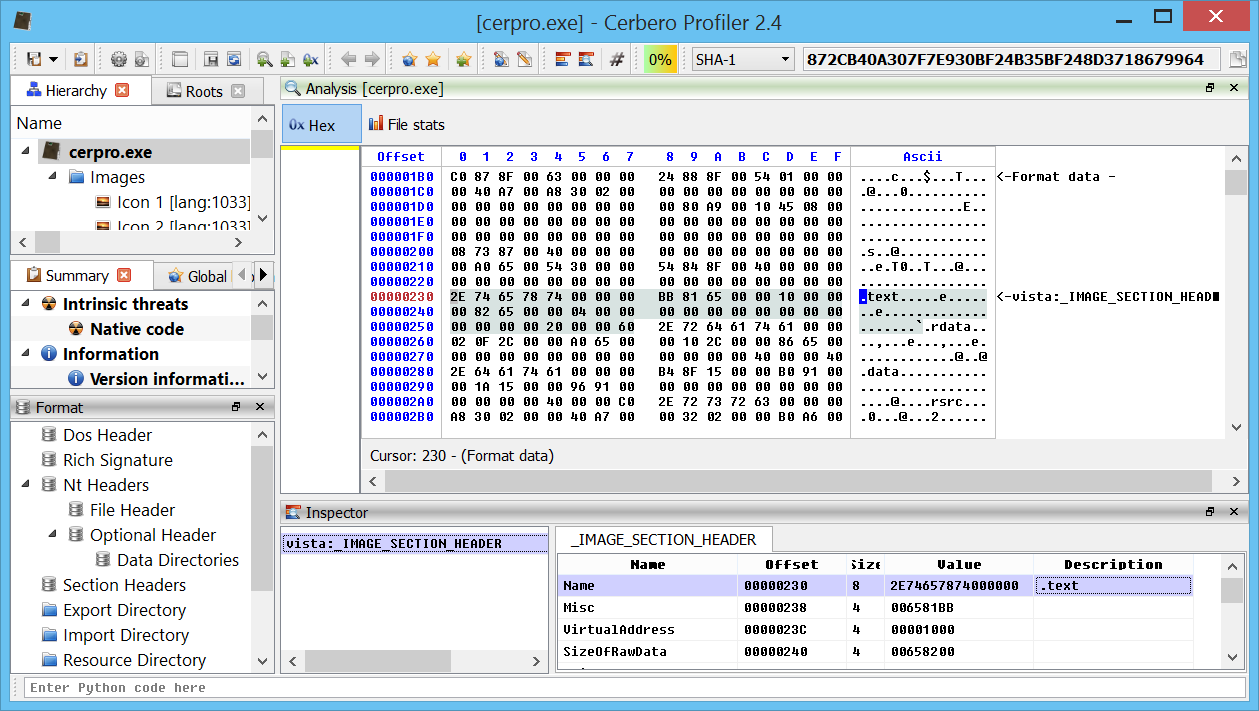 Profiler 2.3 is out with the following news:

Logic providers can now be grouped in order to avoid clutter in the main window. Adding the following line to an existing logic provider will result in a new group being created:

A handy Python action to convert from hex to text and vice-versa using all of Python’s supported encodings. Place yourself in a hex or text view and run the encoding/decoding action ‘Bytes to text’ or ‘Text to bytes’. 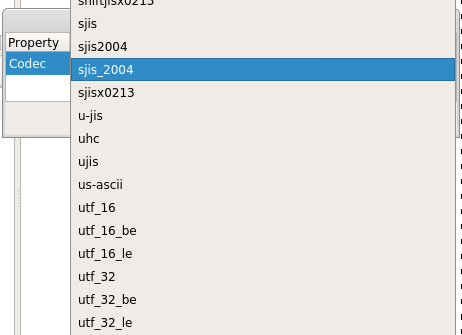 The operation will open a new text or hex view depending if it was an encoding or a decoding.

Strips tags from an XML and displays only the text. The action can be performed both on a hex and text view. 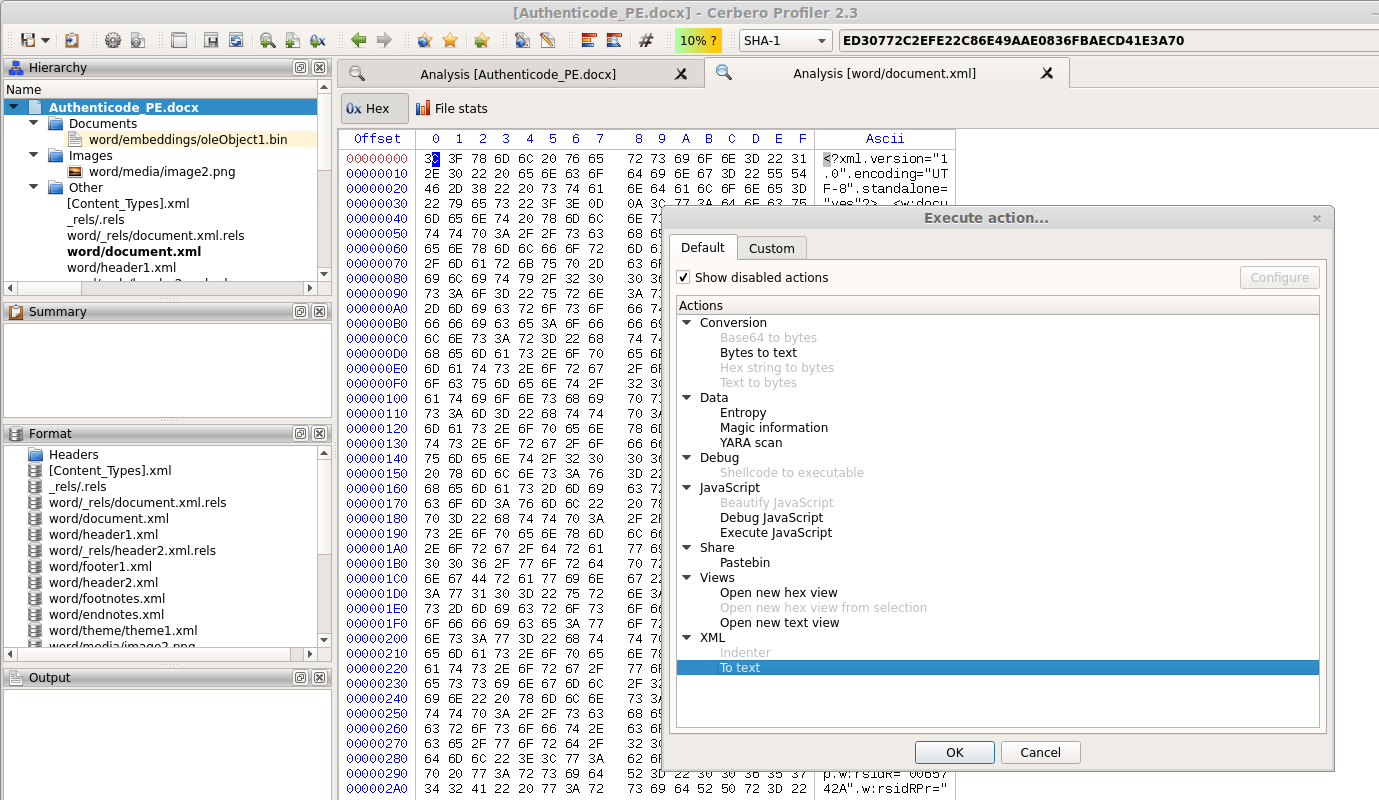 And it will open a new text view. This is useful to view the text of a DOCX or ODT document. In the future the preview for these documents will be made available automatically, but in the meantime this action is helpful. 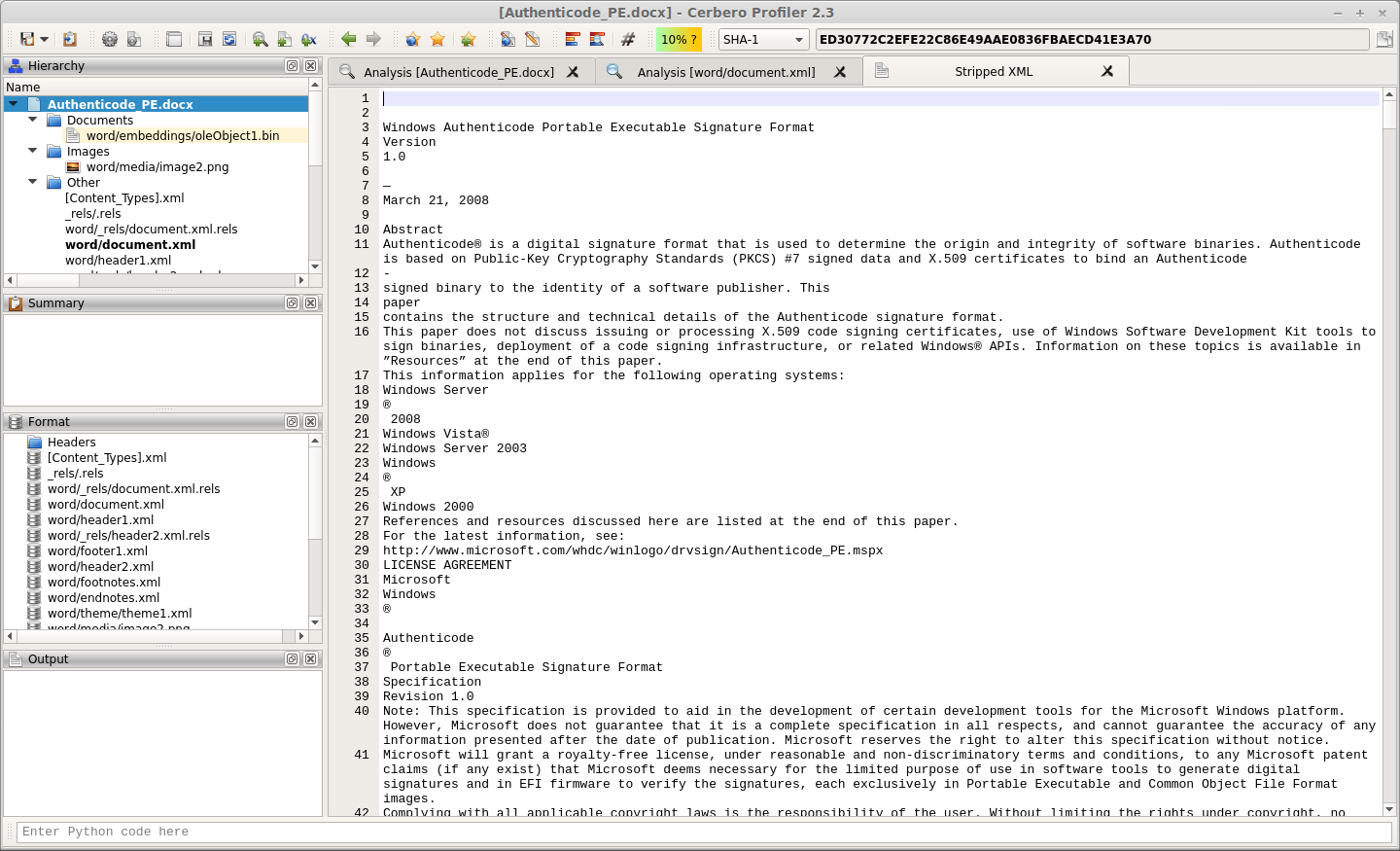 The fixed font used in most views can now be chosen from the ‘General’ settings.

When adding a structure or interval to the hex view the chosen color is now being randomized every time the dialog shows up. This behaviour can be disabled from the dialog itself and it’s also possible to randomize again the color by clicking on the specific refresh button. 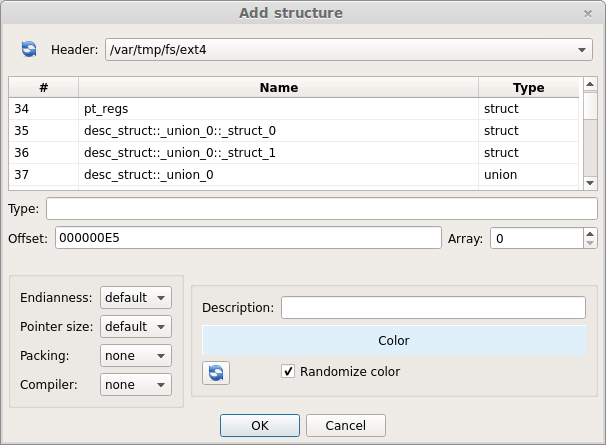 Manually picking a different color for every interval is time consuming and so this feature should speed up raw data analysis.

Most of the report APIs have been exposed (check out the SDK documentation). This combined with the newly introduced ‘quit’ SDK method can be used to perform custom scans programmatically and save the resulting report.

Here’s a small example which can be launched from the command line:

The command line syntax to run this script would be:

The UI will show up and close automatically once the ‘quit’ method is called. Running this script in console mode using the ‘-c’ parameter is not yet possible, because of the differences in message handling on different platforms, but it will be in the future.

The output view of the main window and of the workspace are now synchronized, thus avoiding missing important log messages being printed in one or the other context.

The new version of Profiler is out and it includes support for Linux x64!

Some time ago we did a poll to ask our users if they preferred an x86 or x64 edition for Linux. The participants voted unanimously for x64 and thus here it is! 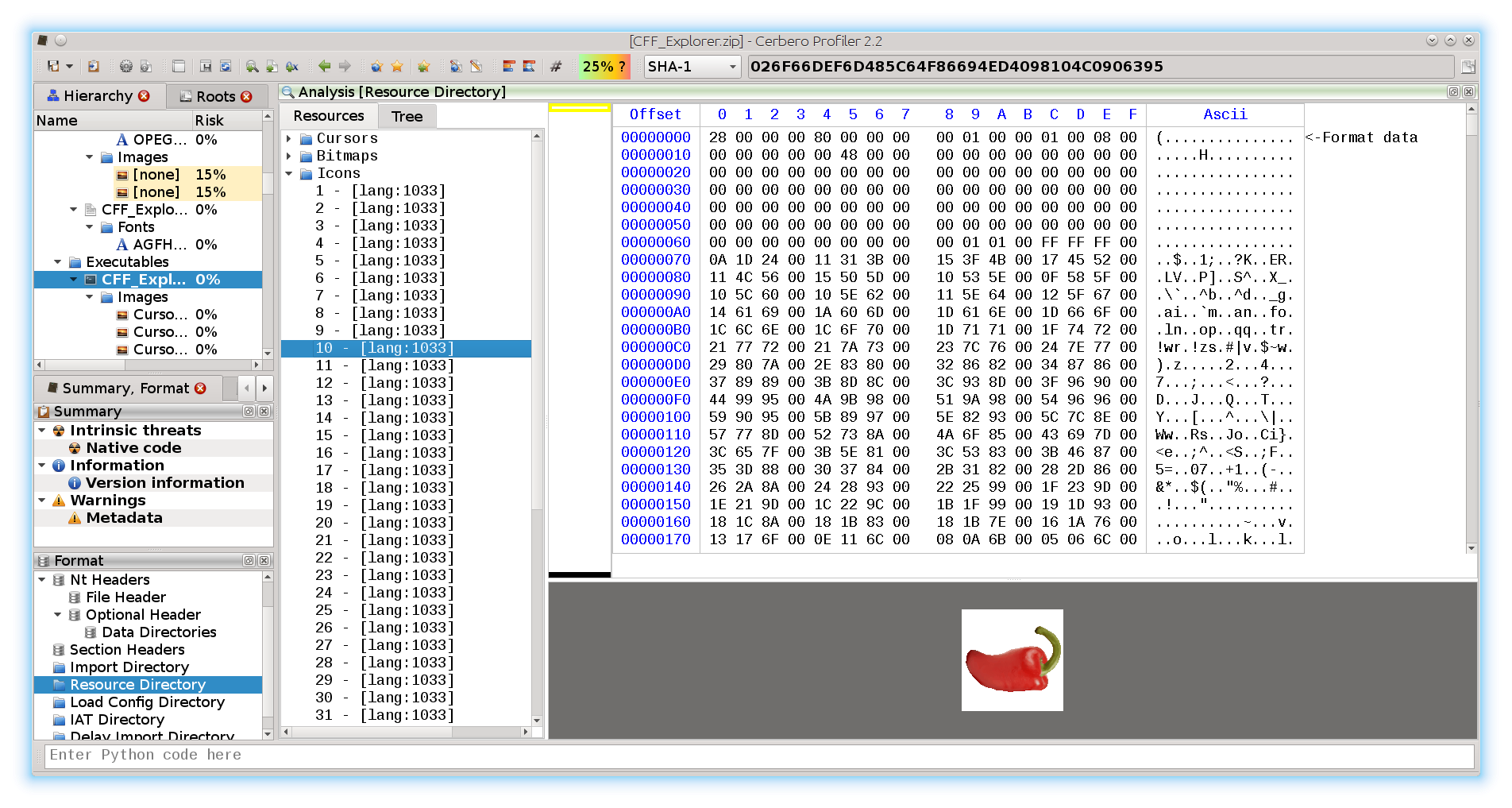 The new version of Profiler is out and it includes support for Mac OS X! 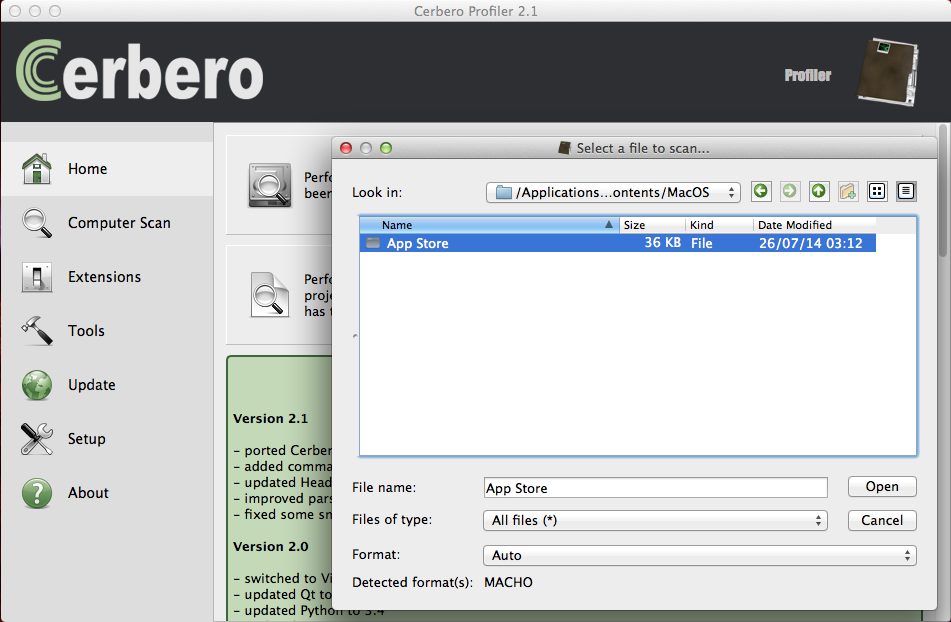 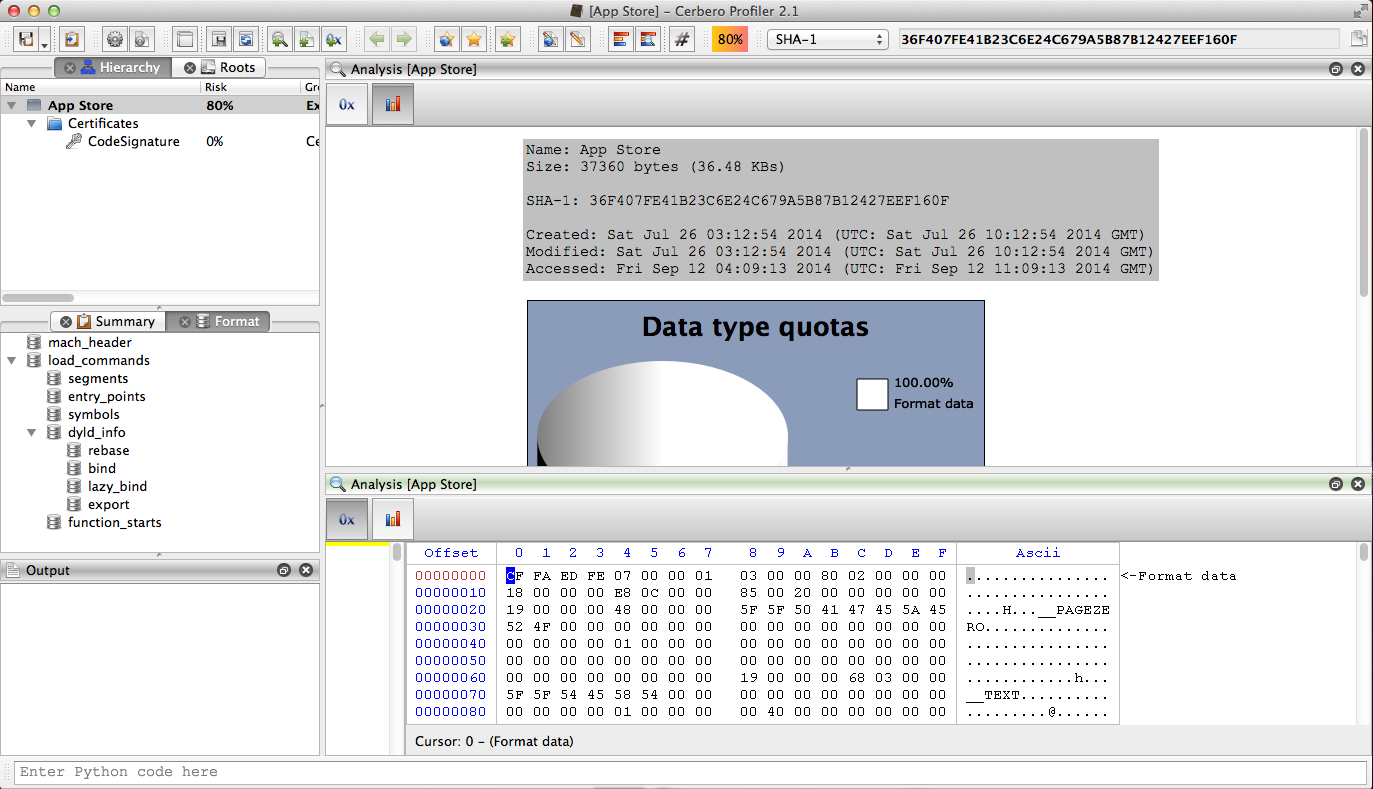 Here’s the change-list for the current version:

The new version 2.0 is out! The most important news is that we have a new online store, which allows orders from individuals and not only from organizations. If you’re not yet one of our customers, make sure to test out our trial. 🙂

We now offer 2 type of licenses Home/Academic and Commercial. Also, the price of the commercial license has been reduced. The reason for this is that we stripped active support from the license cost (we now offer support only in the advanced version). After 2 years on the road we had very few support requests and so it made sense to make licenses cheaper by removing the costs of support.

We’re currently finishing to port Profiler to Linux and OSX, so these platforms will be available soon. The current change-list reflects the changes in licensing and our cross-platform effort:

We switched to Qt 5, so PySide is unfortunately no longer supported. On the other hand the SDK now allows to build complex UIs. In fact, we fixed lots of minor issues in the SDK. The reason for that is that in the last months we had to offer a lot of SDK support and so we had to postpone many new features. The upside is that our SDK has become much more robust.

We also changed our licensing schema, which is no longer year-based, but version based. To compensate current customers for the lack of updates in the last months, we have renewed for free their license for the 2.x series. If you’re an active customer and you haven’t received your new license, please contact us!

As announced some time ago on Twitter, there will be a Linux edition of Profiler. There are other tools to port and there’s additional testing still to do. However, here’s are some preview screenshots. Absolutely no feature will be missing.

Don’t be scared by the huge fonts, I use a high DPI value. 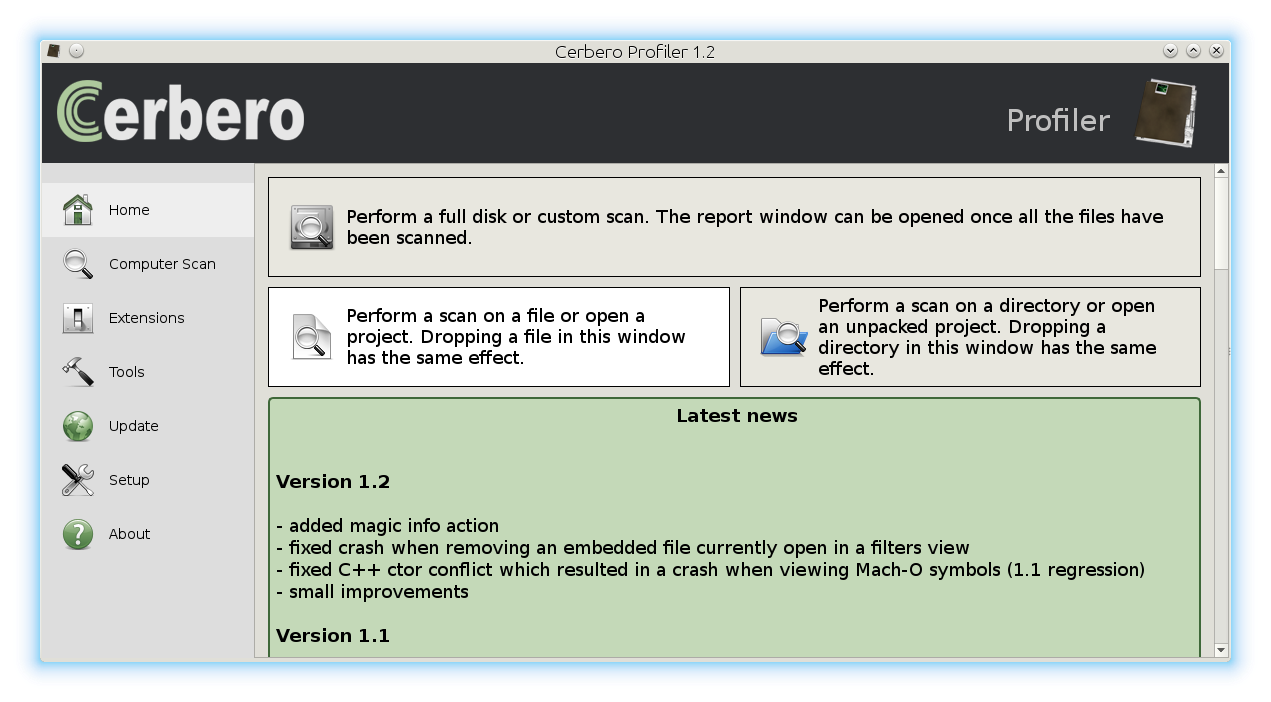 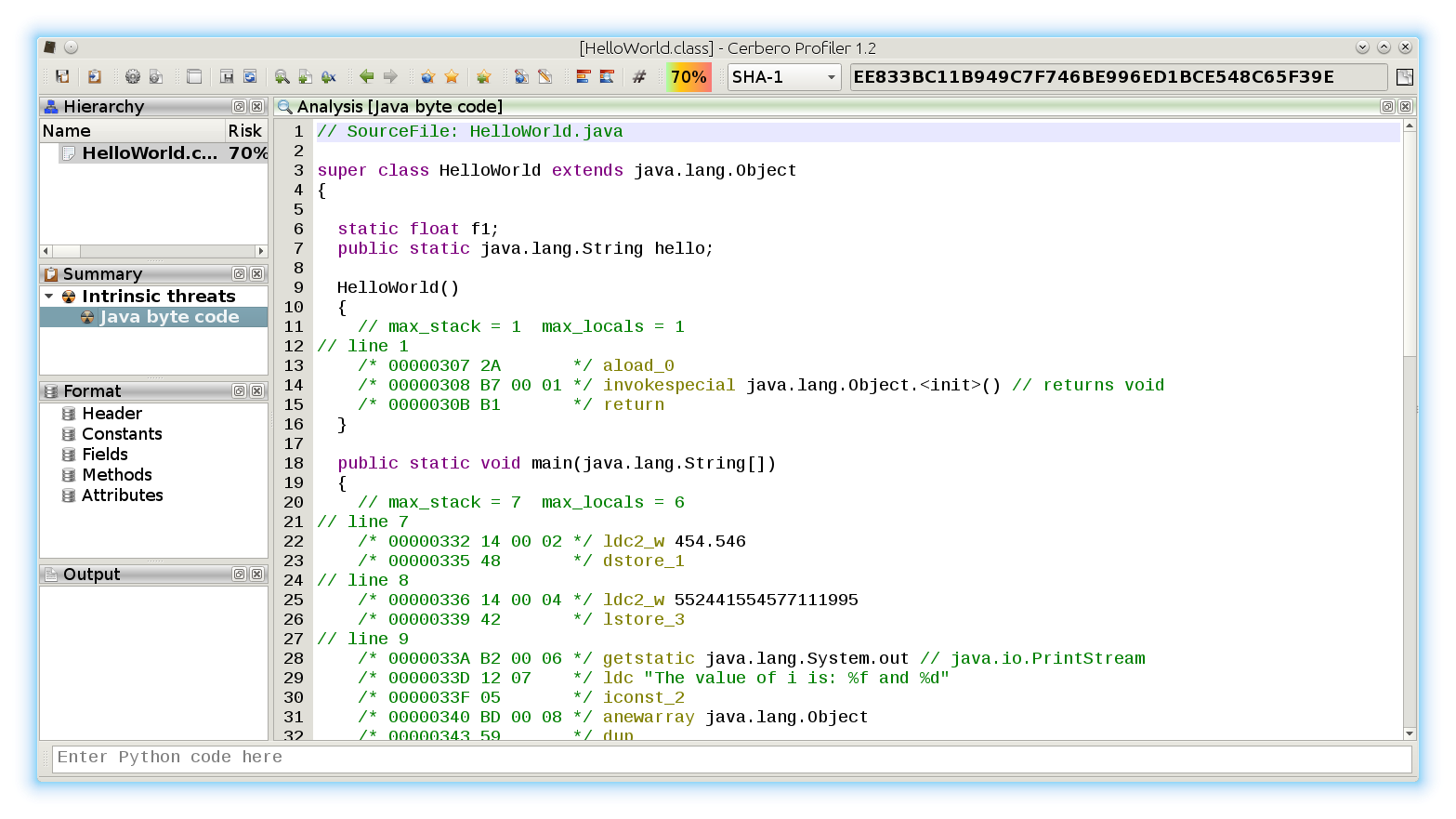 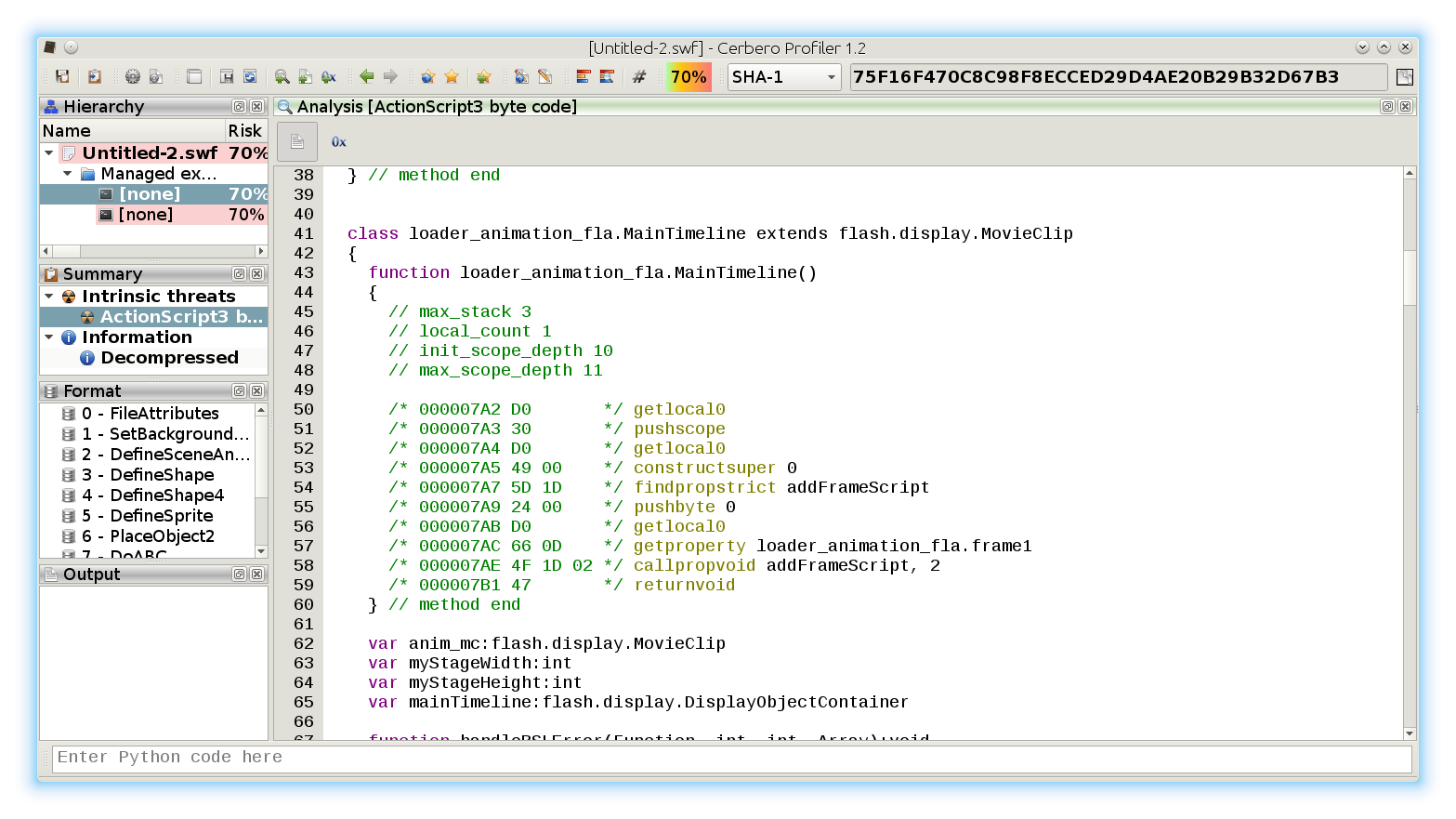 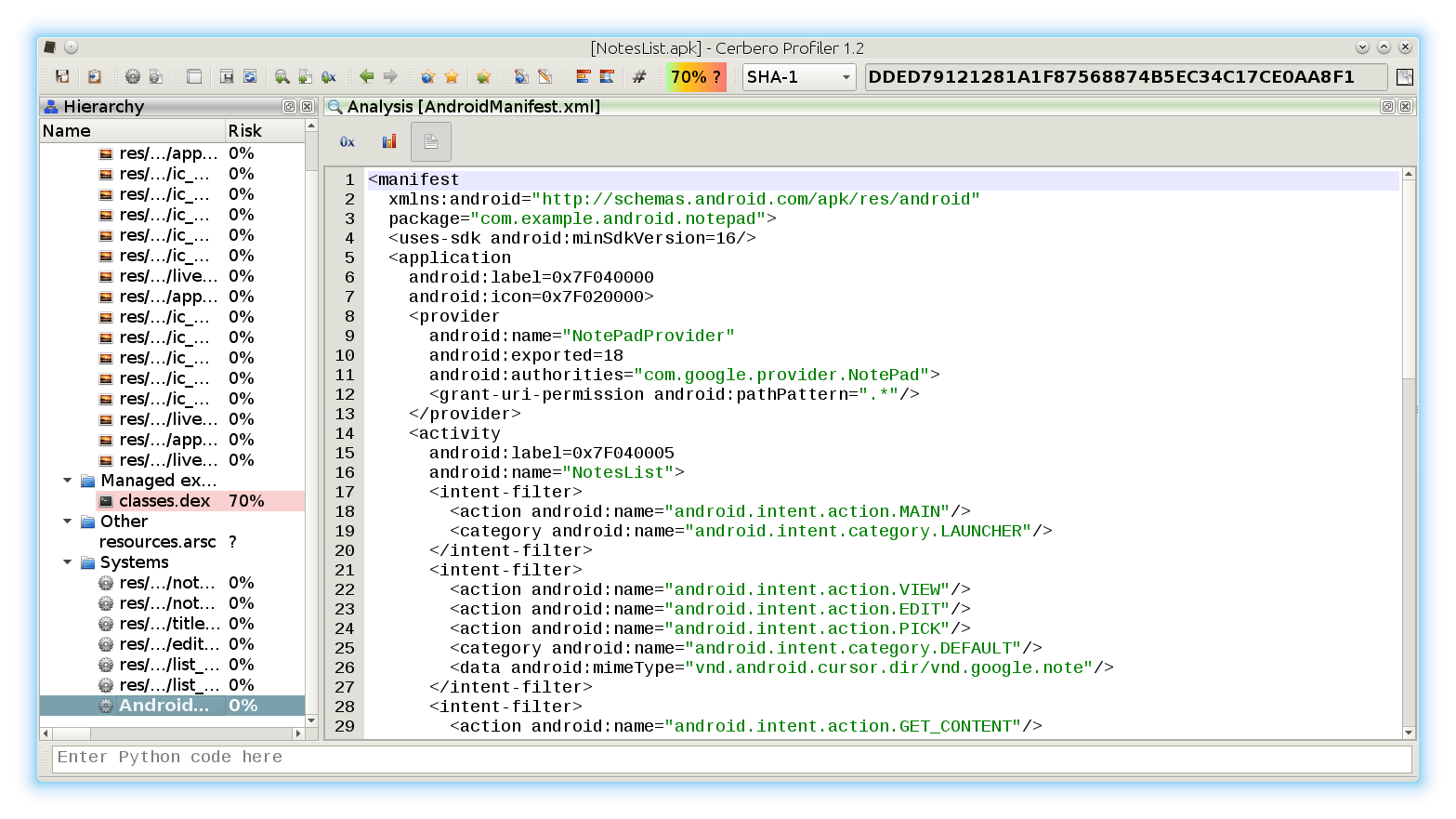 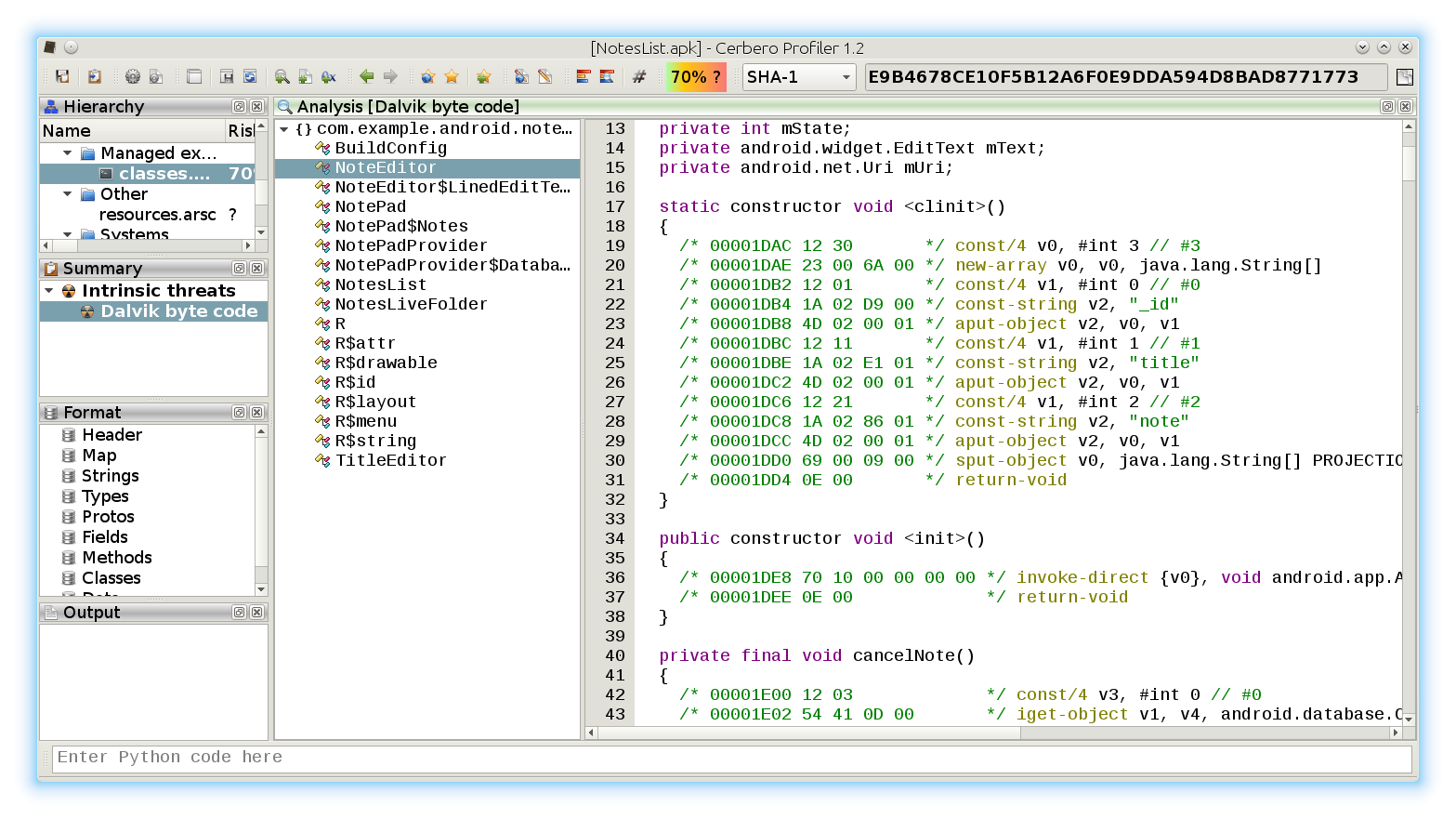 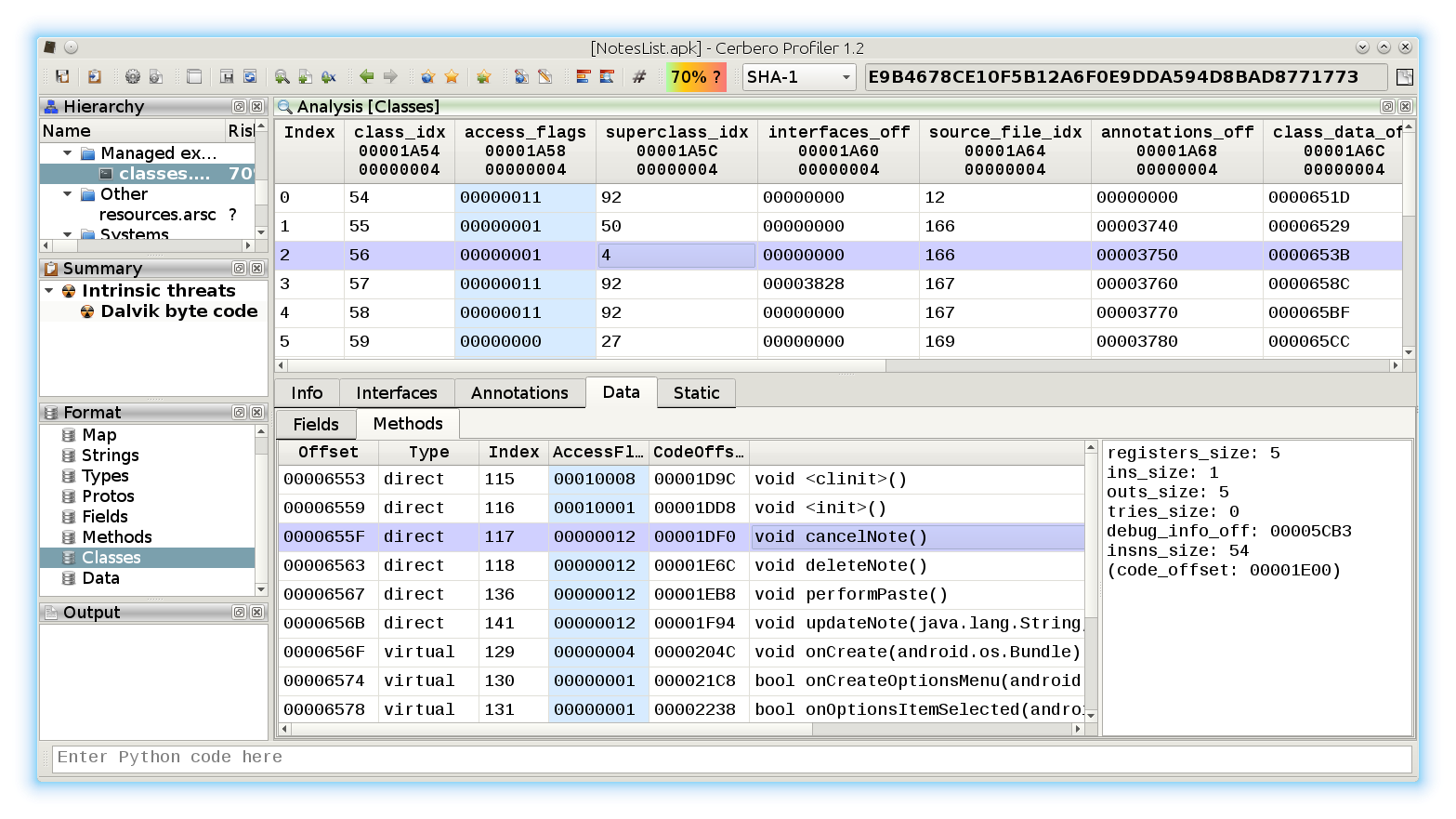 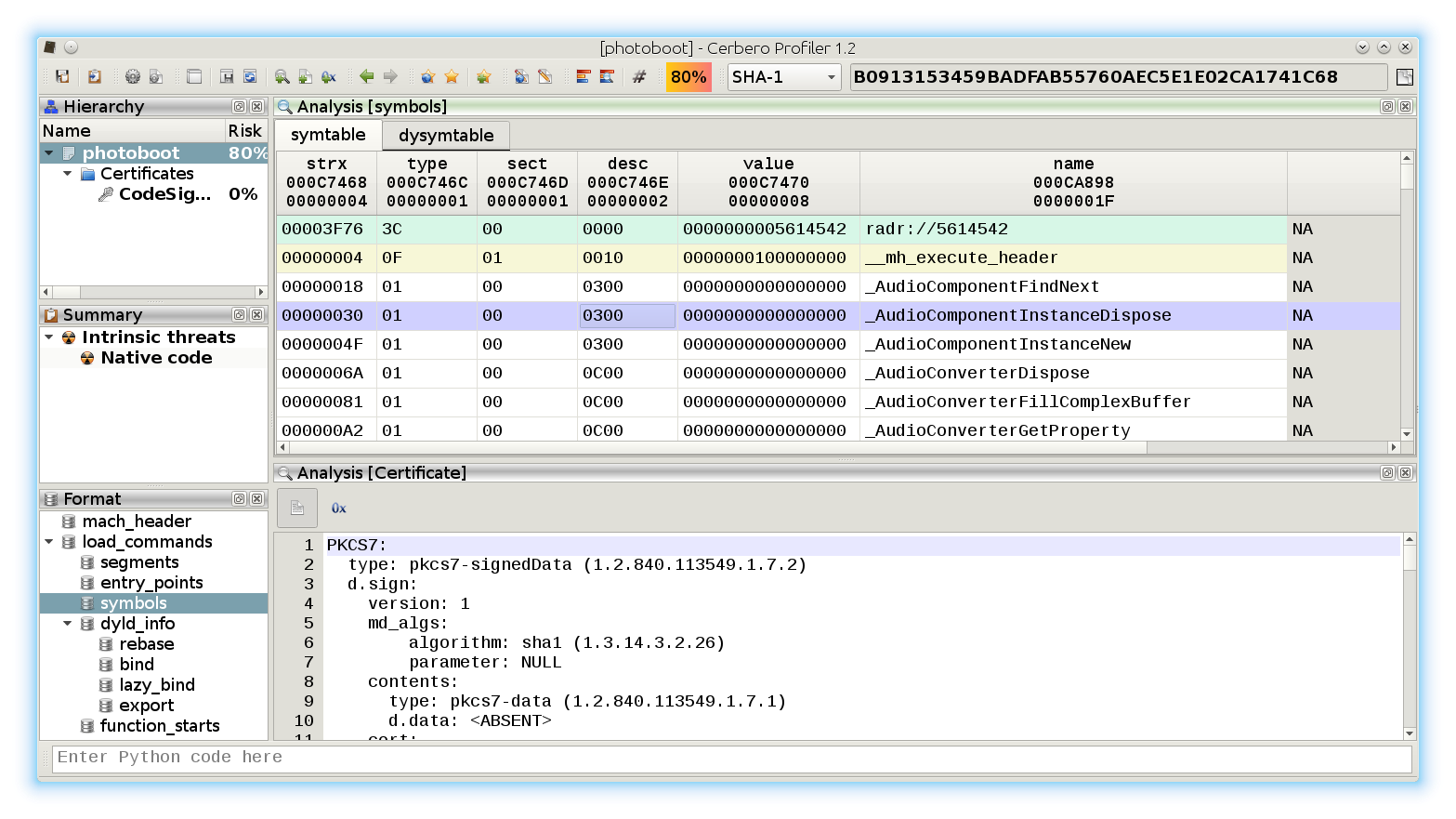 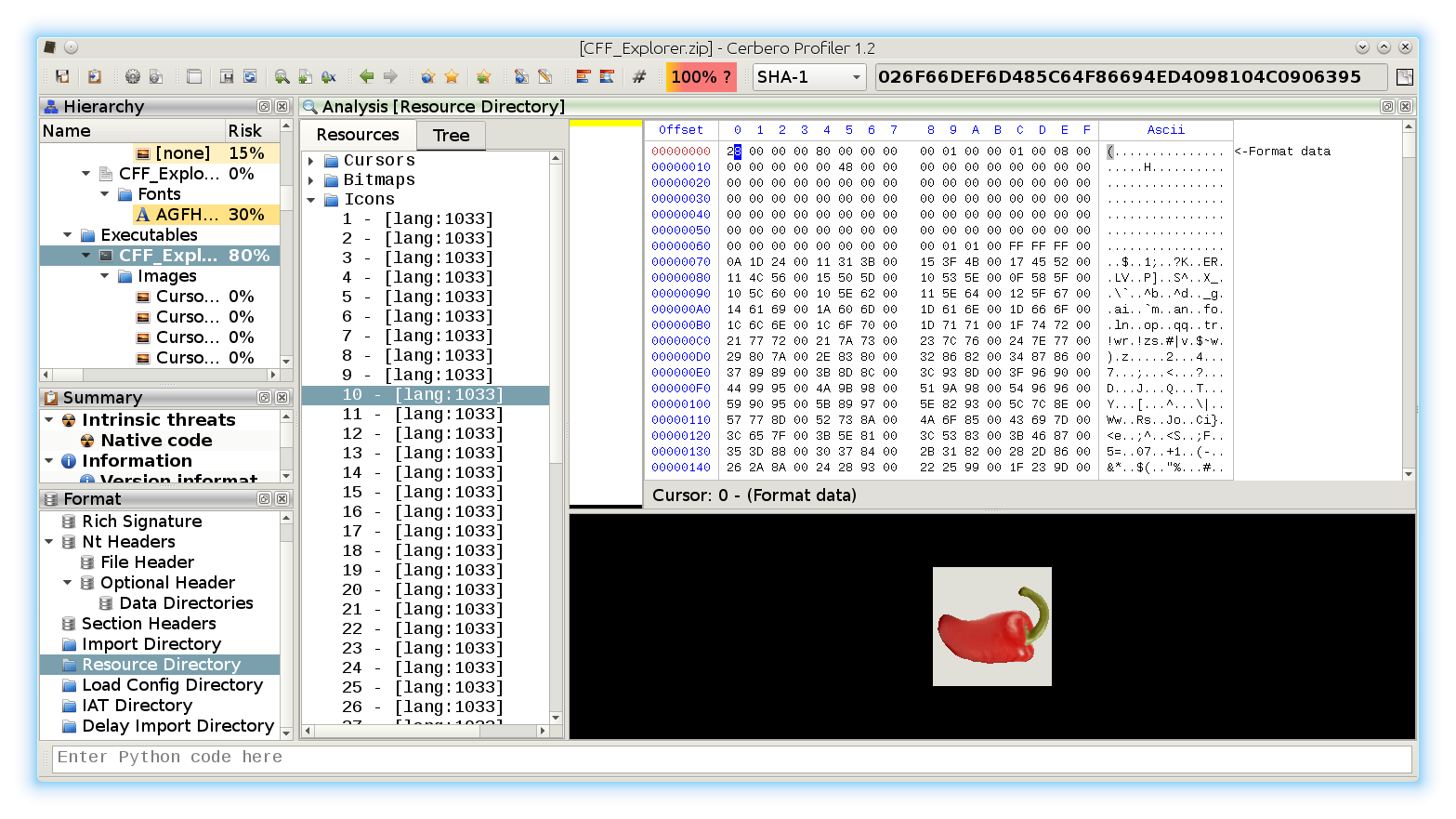 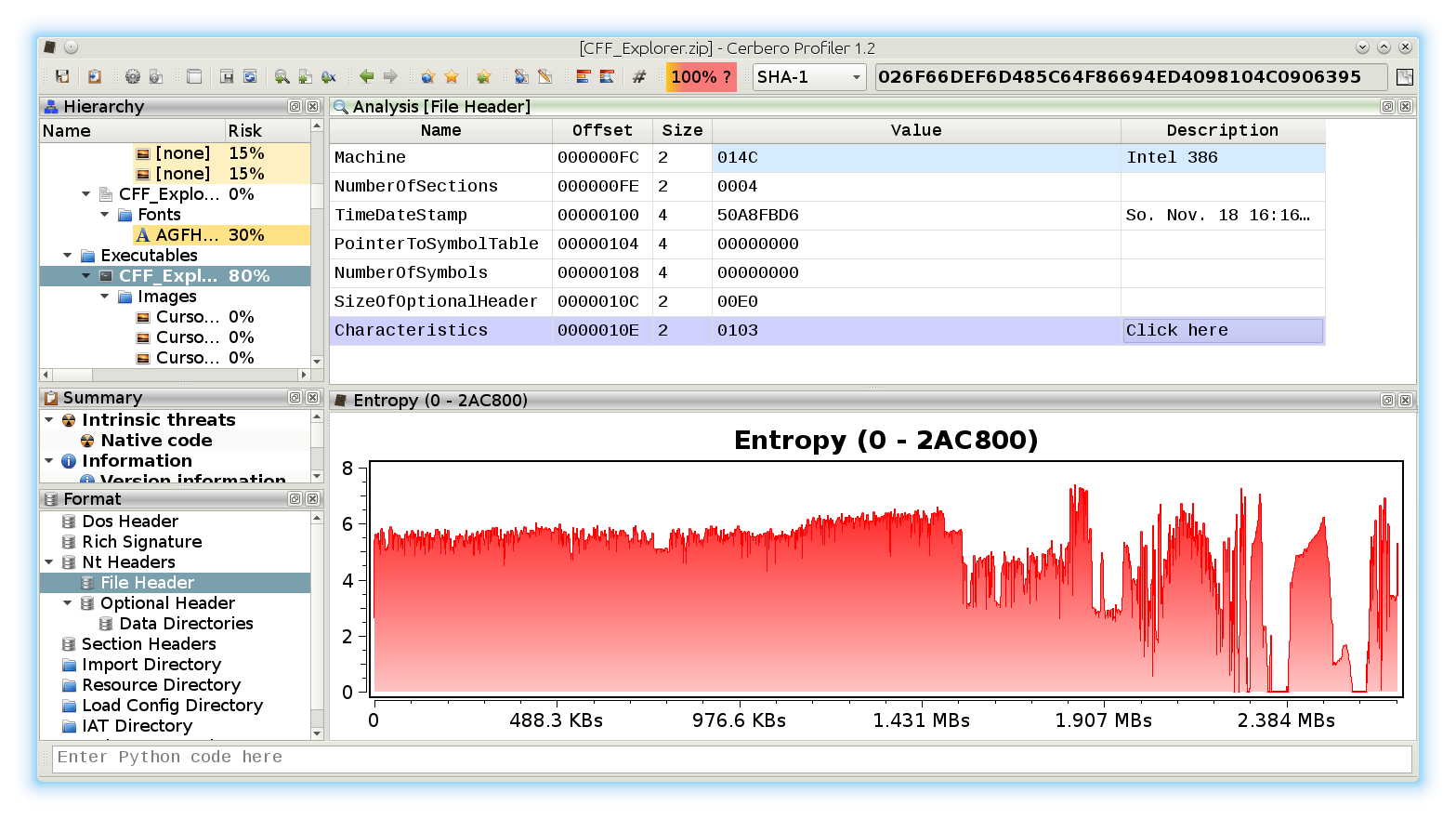 This is mainly a bug fix version.

If you’re curious about the ctor conflict, I have written a small post explaining it.